I was very aware that getting some cheap flights and accommodation for Dubai wasn’t going to be the end of it. In fact, it’s been the only holiday since I was about 19 that I have actively saved for (my normal holidays mostly involve just eating and drinking which isn’t too dissimilar from my everyday life).

By the time Dubai rolled around, I’d saved £500 (HUGE FEAT FOR ME, FELT LIKE A REAL LIVE ADULT) so that I wouldn’t have to worry about costs. After all, we were going away for a friends’ 30th birthday and so I knew it was going to be a one off expense that I wasn’t likely to do again.

So, what did we get up to? And most importantly, was it worth it? 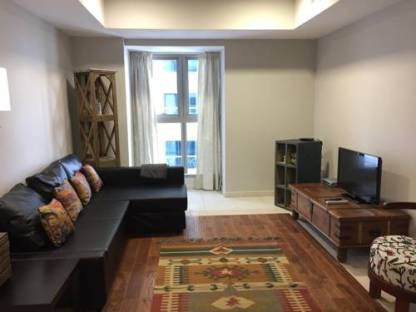 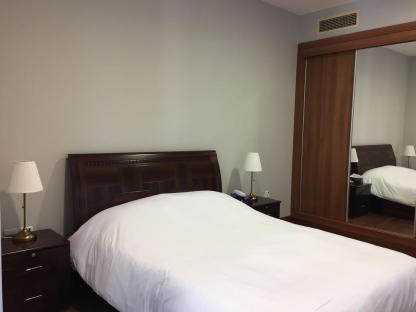 Having seen our friends’ flash suites at the Marriott before checking in, we were a little apprehensive of what we’d find but overall, it was clean, spacious and had everything we needed. Sure, we wouldn’t want to hang out and spend our evenings there, but that wasn’t really the point.

Plus, the 97th floor residents lounge had amazing views and the outdoor jacuzzi on hangover number one really helped us out. 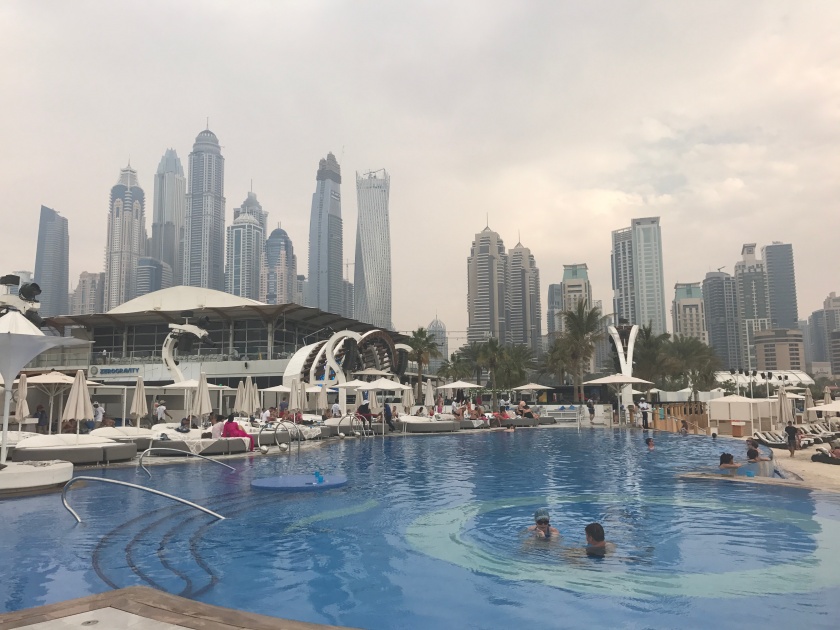 After dropping our things off, we headed to Zero Gravity, a beach, bar and restaurant located by Dubai Marina. Costing £35 to get in (or slightly less for a couple – though note that this doesn’t include friends or same sex couples), the price included a free drink and access to all the facilities.

It was very much a place to be seen. The bathrooms were INCROYABLE. Showers, mirrors, hairdryers, straighteners – I almost felt a bit bad for having not put any make up on that day (almost). On my first visit, two girls were doing a mini-photoshoot in there and on my second, they were just finishing up (realised that this could be interpreted that I have a very weak bladder but I was only 2 beers in by this point, fellas).

There’s plenty of sunbeds on the beach and around the pool but if you want a big sunbed, it comes at a price. £200 minimum spend to be exact (YOWZERS). Fortunately, it was a quiet day so we managed to get a couple towards the back without promising away all our dirhams though, between 10 of us and at Dubai prices, we may just have reached the minimum spend… Twice.

So, was it worth it?

It’s a toughie and it all depends what you want out of your day. If you want a whole day of sunbathing but you want the ease of having everything on hand, then it kind of makes sense. If you’re just going for a couple of hours, maybe not.

As for drinking, it’s definitely pricey – we’re talking about £8 for a bottle of beer and £11 for a cocktail so if you’re wanting to get merry, get ready to spend a lot. But at the same time, you can’t drink on free public beaches.

For me, I had a great time but given that we were only there three hours, I’d say it wasn’t worth the cost. But I can totally see why people go.

The Brunch
Bubbalicious at The Westin Dubai
£125 for 4 hours of unlimited food, drink and prosecco

It seemed that when anyone went to Dubai, the one thing they’d bang on about on their return was the brunch. No, not Eggs Benedict but a full scale Red Hot World Buffet on steroids with free flowing fizz.

According to our friends, Bubbalicious is the best, but it’s also the most expensive. There’s plenty of cheaper brunches that take place each Friday (the start of Dubai’s weekend), but we’ve been assured that you get what you pay for.

Having been regaled with tales of ‘this one time at brunch…’, I was prepared for the sheer extravagance of it all. The food hall was impressive. Every single kind of food that you could want was there, and whilst I compared it to Red Hot World Buffet, the food is of a much higher quality. Yet, if I’m honest, I’m not really a buffet girl. I like a plate of food that’s been thought about and several drinks in, it was an effort to even remember to eat, let alone find foods that complimented one another.

What I was really impressed with was the drink. There were no knock offs here. Premium beers, spirits and cocktail creations were widely available almost instantly (queues only appeared in the last 30 minutes) and our prosecco glasses were kept topped up at the table. It was incredibly easy to see how people get so trollied at these things…

As I was vlogging (or attempting to at least) during this, I kept a log of evrything I had during those 4 hours. I actually thought I wasn’t drunk when 4pm rolled in!

After ‘stockpiling’ the drinks in the last 30 minutes, we drank at our table until 4:30pm before taking a couple of drinks each up to the DJ in the hotel club.

Now, let’s not be silly here – £125 is a lot of money. But given the sheer expense of drinks in a bar out there, it’s actually quite easy to get your money’s worth if you’re on a blow out. I actually didn’t spend another penny that day so all in all, I would say it was worth it.

When our friend had said ‘I’m thinking of hiring a yacht the day after brunch’, I was a little apprehensive given the fact it was the day following our £125 brunch. Yet, when the price came back as £30 each for 3 hours and that we could take our own drink on board, I thought it was pretty damn reasonable.

The boat was bigger than expected and sat up top deck with the wind whipping around us was the perfect way to shake off our brunch hangovers.

If you fancy doing something similar, just keep in mind that buying drink in Dubai can be difficult – you need a licence to buy some from a store. We’d picked up a couple bottles of gin in duty free (£11 for a litre!) and the boat supplied mixers and ice.

Our boat trip included speeding past the Palm, taking in the sights and having a bit of a dip in the calm (but cold!) waters.

Absolutely and most definitely worth it.

For our last day, we had really wanted to do a desert safari to inject a little ‘culture’ into the trip, but the weather was god awful and we’d been warned that it was only really worth doing in the sunshine.

With that in mind, we instead decided to check out the mall (which I didn’t actually find that impressive – HUGE but same old shops as you get anywhere) and with it, the tallest building in the world, the Burj Khalifa.

The queues were pretty mega given that we’d already booked a timeslot. It took us an hour to reach the lifts which just so happened to be the exact amount of time it took for a clump of clouds to settle around the viewing deck. 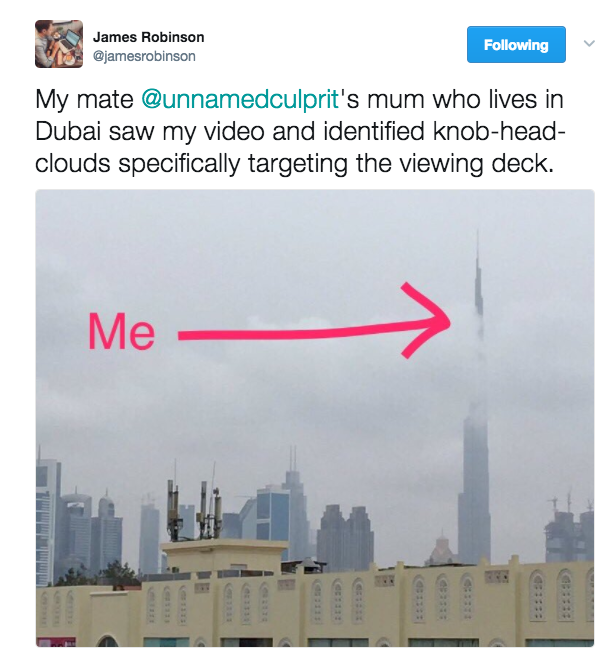 Lousy views aside, I did feel a little let down about the experience as a whole. Yes, the lift that shot us up in 60 seconds was impressive but it really was just a viewing platform and not a lot more.

For £44, I would have to say that it wasn’t worth it. However the housemate, who is very fond of any feat of architecture or engineering, was really impressed so take from that what you will. 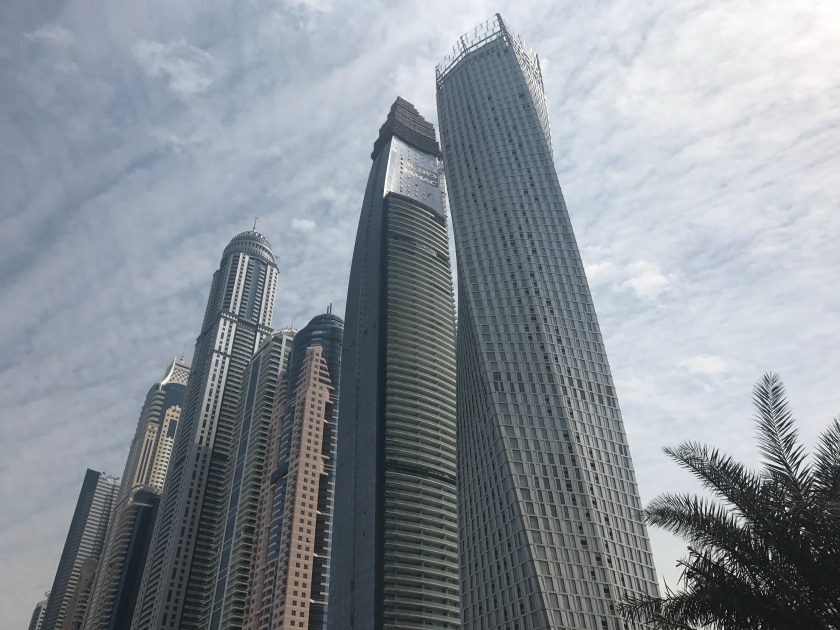 So that’s what we got up to, but overall, was it worth it?

It’s tough because it’s not that straight forward. I had a really good time with my friends and after editing the vlog, I was reminded again of what a laugh I’d had but… My lord, it was expensive.

What with the activities plus my food and drink, the £500 I’d saved was decimated and whilst it may not look or sound like it, there were even a couple of evenings where I didn’t drink at all (honest!).

And I’m glad I went? Absolutely.

So that means it was worth it, surely? Hmmm. Not quite.

I’m happy that I can say I’ve been but I’m not in any rush to go back. The thing is, because Dubai is so new, they’ve borrowed elements from much loved places around the world to create this ‘best of’ metropolitan smorgasbord, yet I didn’t really buy it. I left feeling like I hadn’t really discovered anything new and whilst I had lots of fun, I was very aware that I could have done a lot of it elsewhere for a cheaper price…

Let’s just hope I can find a stonker of a deal for holiday number three, eh?!

You can also watch what we got up to here:

Or ‘Chelsea Travel’ as my friends like to call me.

And that’s because I’m just ever so slightly obsessed with booking holidays.

This ‘obsession’ kicked off a year long challenge where I tried to see how many holidays I could do for half the price the average Brit spends in a year.

What ensued was 10 incredible getaways that included staying in a $1.7 million apartment in New York, a free 2 week stay in Paris and even a business class flight to Benidorm (I kid you not, lads). All of which were captured on my Youtube channel, how many holidays.

Once complete, the challenge got picked up by a whole host of news sites and shared by thousands, and so I thought ‘eh up – people do like a good deal, don’t they?’.

So here I am – continuing on in my cheap holiday search and hoping to help you make the most of your money as well.